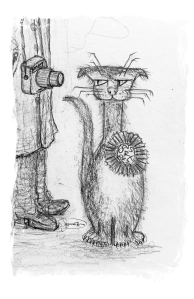 This week has been quite an eventful one in the life of our rather unremarkable little hamlet. Described variously as ‘picturesque’ (Oooh!), ‘quaint’ (Aaah!) and ‘sleepy’ (Oi!), our hitherto undistinguished residential aggregation has attracted the national press. Why, you may ask. Ok so you didn’t but you might as well stick around; you’ve got nothing better to do or you wouldn’t be here, right?  Apparently Dark Forces have infiltrated our local political environment.  Already somewhat right wing, apart from a very few socialists and a larger LibDem enclave whose meetings are apparently attended by one of my cats, the locality was obviously thought fit for an assault by an unpleasant but not banned extremist organisation in the guise of a harmless looking mum who appears to be involved in everything from Scouts to taking out vandals single handed.

Not that we have too many vandals. For the most part the kids here are decent and responsive so that even teenage boys are capable of mustering a social nicety when greeted in the street.  Headlines trumpeting the activities of miscreants generally end in the shocking revelation that litter bins were pushed over and bring to mind an article about terrorists hitting a nearby town.  After describing in detail across an entire front page the alert, the police, and the evacuation of three shops; the journalist, somewhat unwisely in my view, added the clinching commentary of an eyewitness that it was, ‘Really cold out here!’  Well that’s terrorists for you, no consideration of climate or people’s clothing requirements in the event of being decanted onto the pavement in December.

So anyway – Harmless Mum (HM) decided to get herself co-opted onto the parish council (think Dibley[1] here) which woke up with a start (even the bloke responsible for burials and booking the village hall) and began consulting protocols that hadn’t borne the gaze of human eye since Bob Cratchet’s day. The upshot was a parish council election and the sudden racking up of national interest with retired councillors putting themselves back on the market and a couple of new ones emerging to take up the slack, an ill-judged reaction as it (nearly) turned out.

The village, we were told, was divided with HM cornering the market in other HMs who were evidently able to get past the poisonous politics to the wonderful warm human being beneath, and the rest who consulted Babel Fish which translated ‘community involvement’ as ‘subversive infiltration tactics’. We were out in force. There were paparazzi.  Well, one anyway, presumably on the lookout for a rumpus which, disappointingly, did not transpire while I was doing my civic duty at the polling station.

The upshot? According to the parish web site (oh yes, there is one although you can quite easily end up on the god-botherers’ home page and narrowly miss signing up for the graveyard grass-mowing rota) the Good Burghers of the village thwarted the Silly Burghers by just twenty votes.  We went back to being journalistically immaterial.

[1] That’s the BBC’s The Vicar of Dibley with Dawn French, just in case this publication ends up in a time capsule under a bridge.