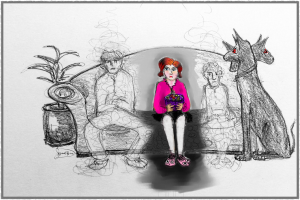 Drop Dead Gorgeous – a Halloween(ish) tale of ghosts (maybe) and quantum phasing (your guess is as good as mine). Bit sweary so don’t let the kids loose.

I first met Dillon when my dead Gran tripped me up in front of him. There was me, meandering along the sea front watching small dogs on extending leads crochet themselves into yapping compounds each time they encountered others of their ilk; and there was he, arrowing through them, the sleek lycra-ed warp to their woof. I was ok but he landed up in hospital with several broken bones and his bike was a write-off. Gran beamed like it was her birthday and she’d knocked back her celebratory bottle of whisky all in one go.

I wasn’t planning on visiting him; after all he’d reason to be mad and maybe even to monetise that. Can you sue pedestrians? But Gran had other ideas; I got the train to uni, it broke down and the replacement bus dropped me outside the hospital. I walked, there was an incident and a diversion that went right past A&E. I tried taking a taxi; the driver had a heart attack. So to avoid any further disasters befalling the largely innocent public, I gave in. Five minutes tops should do it, I reckoned.

‘Shut up,’ I said, trying not to move my mouth as if this somehow compensated for the conspicuous absence of a third party. It didn’t. Dillon looked around the room and started to reach for the call bell. I could see his point.

‘No, not you,’ I said, and fiddled around with a fantasy earpiece under my hair. ‘Bloody signal’s gone,’ I said, palming the non-existent device and shoving it in my pocket. I gave him one of those modern technology, what can you do? looks and shrugged at him.

Gran continued her onslaught. ‘Physicist,’ she said, picking at teeth that would be at least a hundred years old if she’d managed to haul her liver past eighty-six. ‘Should suit you, with all your book-learnin’ an’ that.’ She gave me a shove, ‘Go on, sit on his bed.’ I was propelled forwards and alarm spread across Dillon’s face as the woman who had put him there in the first place threatened to flatten him all over again. I grabbed at a drip pole. It was on wheels so we took each other down, along with a vase of flowers, a jug of water, and a box of tissues. The almighty racket drew the attention of a frosty-looking nurse in pink scrubs who rushed first to Dillon to inspect him for injury, and then turned her rather less solicitous gaze on me, sprawled on the floor at her feet.

‘And you are?’ she said, like we were at a posh party and I wasn’t on the guest list. I opened my mouth preparing to kill two birds with one F-bomb but …

‘My girlfriend,’ said Dillon, into the gap.

‘Yes,’ Gran said through my teeth, tittering in my ear and making kissy-kissy noises.

The nurse glared at me, then at Dillon, ‘Well, in that case …’ and she stomped away to find a cleaner she could terrorise.

‘Jeez!’ Dillon said, rolling his eyes. ‘I owe you; bloody woman’s been ogling me since I got here. Never seems to be off-duty. Have you seen that Stephen King film?’ He smiled one of those crooked smiles you read about.

I promised to pick him up and take him home when he was discharged, and cook dinner as he couldn’t use his hands that well. Turned out he could. Whole other story.

Gran stayed away for quite a while, probably to focus on another deviant descendant, then suddenly, back she came.

‘Cheating gigolo,’ she announced from behind the sofa. I nearly lost my takeaway. ‘Quantum research shove-it-up-your-jacksie conference, my Aunt Fanny,’ she said. Gran liked an expletive or two, albeit somewhat retro ones.

‘So-called research assistant – more bosom than brains,’ she said, ‘And the bosom’s not much to write home about, if you ask me.’

Gran was right; Rihanna, her name was, and I met her at the faculty Christmas do a couple of months later. There she was, goggling at Dillon, passing him wine and nibbles, chirping about quantum entangled whatnots and superstring that apparently has toes, and Dillon mesmerised by her heaving chest. Gran dug me in the ribs then grabbed both my ears. This, apparently, was a way of establishing a conduit between her plane of existence and ours. She shrieked at Dillon, ‘You cunning, conniving, slippery little wormhole, you!’ Then she rose into the air and loomed over Rihanna, ‘And you should know all about quantum, with your itty bitty IQ and your Schroedinger’s now-you-see-it-now-you-don’t brazz-ee-ere!’ Gran had evidently upgraded her vocabulary since our last encounter; she embarked on a cackle.

Then somebody with a beard that looked as though it might house a decent sized lunch, and a T shirt bearing the periodic table in swear words said, ‘Quantum phasing,’ in hushed tones like he was in a church. He gawped, simultaneously awestruck and terrified and Gran turned on him, treated him to a blast of old onions and fried liver right into his face. She clacked her teeth, ‘Phantom,’ she hissed, and hovered yellow fingers over his throat.

‘Cobblers,’ said Dillon. ‘No such thing as ghosts. Quantum phased reality shifts though, there’s mileage in that.’ His face went into intellectually distracted mode. It was short-lived. Gran loomed back in Dillon’s direction, ‘Quantum reality shift, my arse,’ she said. ‘Tell you what, though, let’s put it to the test.’ And she dropped the ceiling on him.

Some days it’s just Dillon sitting behind me on the train; sometimes it’s Gran; other times it’s the pair of them. They’re still arguing the toss about ghosts versus quantum universes and they can’t agree on suitable boyfriends for me, which threatens the long term survival of potential suitors. So Gran borrowed me a part-time dog for company. ‘Big bugger,’ she said, handing me his collars, ‘And he’s got what you might call ongoing duties elsewhere, but he’ll keep the riff-raff away; happy clappies, dodgy roofers, Tories.’

He is and he does because he’s got one helluva howl on him, but he’s a poppet and when all three of us are indoors together, we each have a head to pat.