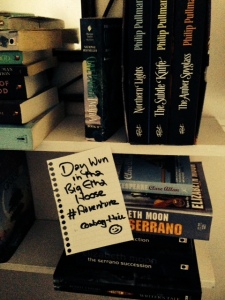 Eight Days of Ether: every day a new theme and only 24 hours to submit:

I thought I’d give maybe one or two a go but maths was never my strong point and anyway, come the end, I’d have eight pieces of flash that would otherwise never have seen daylight. Also, taking a peek at the next day’s theme brought out the competitor in me. I didn’t make it easy for myself though, after getting through the first without mentioning the topic by name (or even syno-name) the game was on …

Adventures can be crash bang wallop, magical, fantastic and physical, but so many of them are internal – they’re what we construe as adventure and sometimes someone else has to make them happen for us. Books and films are proxy adventures; stories that involve us and allow us to rehearse or examine our reaction to challenging events – how would we cope trapped down a pothole with deadly toothy creatures in it, or on the end of that swinging boom in Gravity[1]? Books and films don’t arrive fully formed, they’re assembled from little bits of ideas, clips of dreams or nightmares, aunties on buses. This story is about the point between there being nothing and then there being something. Here’s the link

[1] Gravity – that film with Sandra Bullock and George Clooney. Massive suspension of disbelief, mostly around the idea that our heroine is able to tackle the dashboards of strange shuttles in three different languages. That and she ends up in a lake in a jungle and there aren’t any crocodiles.