Somehow, normal time – the sort that plods predictably slowly during tedious meetings and gallops along through anything enjoyable – ties itself in knots come November. October is October – sensible and operating within the rules, as is most of November. Too early to think of Christmas so I don’t. Next thing I know we’ve been through a wormhole and here we are heading down a temporal waterslide to the last posting day for second class and no chance of parking in town without a scrap.

To add to the mayhem, I started a Fine Art degree in October and suddenly lost whatever capability I thought I had to wield a pencil. One assignment done and I’m bracing myself for excoriating tutor feedback. Part Two of this first level in drawing involves still life composition which was enough of a challenge even before I forgot and ate it. I’ll use ornaments next time.

There are three modules to this level, two to the next and just one for the final ‘year’. I’m hoping to be done before I’m carted off to a place of safety. Part of the deal is to keep a live log so if my progress (I hope that’s what it will be!) as a rather senior undergraduate interests you, it’s here.  Something a bit less rule-bound and where I remind myself that cats at least attract interest and even sell in shops is here.

These shenanigans have put writing on hold for the moment, but it will be back and probably with new perspectives to consider as story lines. If you haven’t come across the group Forensic Architecture then please do take a look. Based at Goldsmiths university, they pull together images and reports of incidents such as the chlorine gas bombing of Syria for which no one would take responsibility, and work back the trail using meticulously developed 3D models or graphics of timelines from radio signals to establish probabalistic evidence. It’s fascinating and who couldn’t use some element of that in a story?

Meanwhile, I have three books on the shelves; there’s Let Me Tell You a Story which is an anthology of poems and short fiction written (and read – just scan the QR code at the top of each title) by an international group of writers, one of them Commonwealth Short Story Finalist (Tracy Fells), one a Commonwealth commissioned poet (Phillippa Yaa de Villers), an International Women’s Day poet (Nguyen Phan Que Mai), a BBC Opening Lines short-lister (Anne O’Brien), and a Best of the Net nominee (lil ol’ me). Funny stuff, not-so-funny stuff, and downright heart-breaking stuff. Give it a go?

Then there’s Fat Mo, a novella in three parts. Mo’s story as told by Pauline, the office cleaner and tea lady, Merv, her boss, and Mo herself as she crouches, wrapped in a curtain in her freezing office on Christmas Day in 1970s Yorkshire. It’s a #MeToo story. You can purchase this here; all proceeds go to Respond, a charity that supports people with learning disabilities who have experienced sexual exploitation and abuse.

Finally, a stocking-filler – Not Being First Fish (second edition) is an illustrated collection of, let’s call them diary anecdotes for want of a better term. True unless you recognise yourself in which case they’re complete fantasy. Oddly falls open at the one about looking for underwear in M&S. You’ll find that here and with my name on it instead of the elusive P Spencer Beck after the book distribution system broke itself trying to square that with the copyright page. 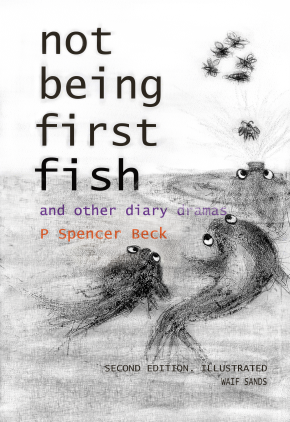 Speaking of squaring things, circles and the like, Christmas is the time I install our artificial tree, set out with a sophisticated design in mind, then give up and tip the bag of dekkies over it and leave it with the cats all night. Four and counting …

Wishing you peace and merriness, and for us all a humane and compassionate resolution to our various political pickles.