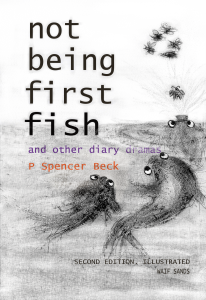 I don’t have to launch my books, they just slip their moorings at dead of night and sneak off. This one, ostensibly by the elusive P Spencer Beck, made its escape yesterday. Described by one reader, who may or may not be a friend and who may or may not have been referring to letting it get loose at all, as ‘sheer lunacy’, this is a work of non-fiction. Little diary snippets reliant on the single perspective and grossly biased memory of the one observer so most likely of dubious veracity.  Not exactly fake news, more hake news, i.e a bit fishy and likely to go off quite quickly if you think you recognise yourself. To check whether or not you might be able to sue, assuming you’re willing to own up to whatever you think you’re described as doing, it’s here.

These are what pass for reviews to date. Sigh.

‘Laughing so much the receptionists came over to see what was going on’. Reader in a dental surgery waiting room. Doesn’t say if they’d already had gas and air.

‘I’d recommend it.’ Reader doesn’t say why, which is a bit of a worry.

‘Why haven’t all ladies of a certain age read this?’ Reader who seems to think it’s a manual of some sort.