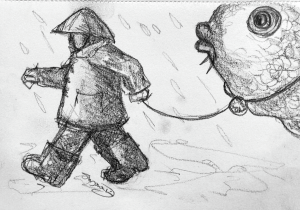 There are days when, having polished off your last borrowed book and even cast a worryingly enthusiastic glance over Alan Titchmarsh’s column in Radio Times, there’s no other way of avoiding the stack of unopened Scientific Americans than checking out the Parish magazine[1].  In the last issue there was an invitation to write in with a send-up of a local business.  At least I think that’s what it said.  Anyway, inspired by the floods that had paralysed the village some while back, I get cracking on a description of ‘my’ micro-chipping service for fish…

Fish n Chips offers a microchipping service that not only identifies missing fish but also locates them using the unique GPS software found in car navigation systems. This is easily installed on your PDA and, once loaded, you can enter the names of up to one hundred fish, each with its own animated icon.  If your fish go missing, just click on the name and follow the beeps – it couldn’t be easier!

Our business was formed just after the floods of the late 1990s when large parts of the village were cut off by standing water and the river was within inches of breaking its banks. People with ponds were alarmed to find that their fish had gone missing as gardens became swimming pools and pond life moved out with the current. Hours were spent wading the streets looking for much loved koi, shubunkins and plain old goldfish, often without success[2].

A forthcoming upgrade to the system, fishnchips.2.v3, will include an automatic return function that, once clicked, will gently control your fish and guide it back to your home (not to be used in drought conditions or during competitive angling contests).

Of course the feline version is already available[3] but there are reports of synchronisation problems due to cats frequently accessing other people’s houses and re-calibrating the system by peeing on the PC.  Recommended lo-tech fixes include seeding the area with KitBits and chopped herring as a distraction but the release of Mutt.4 later this year seems likely to afford a more permanent and less aromatic solution.

[1] Oh how pre-media explosion this was!

[2] This all became a reality in the Somerset floods of 2013 when all manner of exotic fish were found swimming through fields and up lanes. Not so the tracking device. Shoulda listened, shouldn’t they!

[3] This also is a near reality and, given the fish incident, I think I might start patenting my ruminations.

See also Cat Nav [Every Day Fiction September 2012] for an as yet fictional account of advanced microchip technology. Obviously, the human version developed by cats has been fully operational for many years.