…with the sound of feline yodelling. In the manner of one’s elderly granny upping sticks in the middle of the night to go shopping, wearing only carpet slippers and a hat she 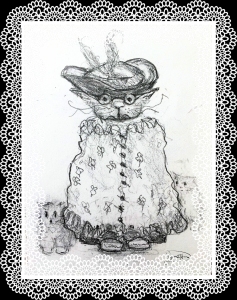 bought for a wedding in 1946 and kept because it would ‘come in’, Pickle is beginning to take leave of whatever senses Persians start out with. This has never been much to write home about as anyone living with a Persian will testify. That blank look, reminiscent of an iDog[1] that just drained its battery, is what Persians do between thoughts, and since thoughts are about as frequent as the bus service from Thwing to Wetwang (real places, I kid you not), being globally switched off is a fairly permanent state of affairs.

That is, until senility sets in, then suddenly all cerebral hell breaks loose and we have full scale regression. In Pickle’s case this is a reprise of motherhood and so, at unspecified (and all too frequent) intervals during the night, she calls to non-existent kittens whom she hopes to feed with the bits of paper she’s collected from under the sofa.

And the yodelling? Well, tiny kittens stay home and you deliver their food to them; initially from the on-board milk bar then later in a dish or, if you’re feral, as a take-away, which means plundering the local rodent population and then chomping bits off for them.

As they get older and more mobile, kittens are more likely to be wreaking havoc; up the curtains, say, on top of a cupboard, or down a hole, so parking yourself at base and chuntering reassuringly in the expectation that they will all line up obediently for souris tartar is hardly going to be effective. So this, of course, is why you yell. You yell in the loudest, lowest frequency you can muster because the sound has to travel through walls, soft furnishings and the piles of crockery in the kitchen cupboards with the so-called cat proof locks. Also a gob full of struggling rodent even if that’s a vague feral fantasy. The upshot is that your cat’s vocal output goes from Lily Allen, unplugged, in the middle of a field to Pavarotti with Hawkwind’s sound system parked behind your left ear.

Remonstration results in an interrogative ‘Miaow?’ in the daintiest of tones followed by the hallelujah chorus. It reminds me of her mother who, having offered a polite ‘Meep’ in response to the question about whether she was in season or not, let out a throaty roar once liberated and set off down the lane, hurdling the garden fences, with me in pursuit wielding a fishing net.

Quite what the neighbours made of this is anyone’s guess but I don’t get too many visitors come Halloween.

[1] We used to be amused by these. It was a progression from watching your hard drive being de-fragged.