Snappy title, yes? No, and not so snappy writing, either. This is one of the questions on the so-called public consultation regarding the NHS. I say so-called because, not only was it barely publicised, as you ‘ll see from this example it’s also barely comprehensible.

What views do you have on our overarching objective of improving outcomes and reducing health inequalities, including by using new measures of comparative quality for local CCG populations to complement the national outcomes measures in the NHS Outcomes Framework?

Imagine the text you need to wade through to even place that in context. Then imagine your reading capacity isn’t, say, Oxbridge level and consider your response. After 40 years ploughing through NHS documents of one sort or another and a reading capability that arguably outstrips that of many, I struggle with this and I’m probably safe in saying that the majority of people – assuming they knew about it in the first place and also how to get it – will find it impossible. The average reading age in the UK is just 10 years and this government knows that. To pitch a public consultation at this level smells of cynical exclusivity even without the failure to give it widespread publicity.
It closes today (November 23rd) but I think we should press for its conclusions to be found null and void and for an accessibly written replacement to then be made available in as many public places as possible.

Post script: a quick and dirty (via Word) analysis of reading ease places this document beyond the reach of at least 54% or the population and that is scandalous. If someone could do a better analysis, please let me know and I’ll link to it. 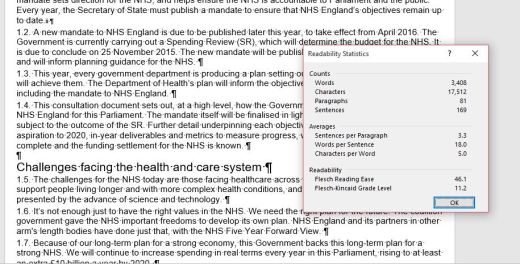 Edit 16.34. I am asking Jeremy Corbyn MP to challenge the legitimacy of this document at PMQs, to ask if it will be withdrawn in the light of its inaccessibility to so many people, and if it will subsequently be replaced by a clearer version which is both easier for most to read and with wider availability with or without internet capability.

Edit 18.12. I was sent a form to submit my question, this is the question: The NHS Spending Review consultation document was poorly publicised but worse, it is written in sophisticated and complex language which is hard to read and harder to understand for more than 50% of the UK population. Will he scrap the results as invalid on those grounds and, with advice, make widely available a replacement document written to accommodate average literacy levels?