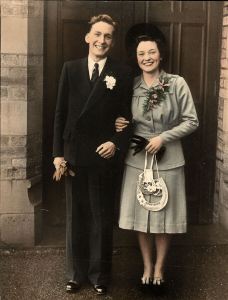 The last day you do something

You won’t know which day or what the thing is that you will never do again, but each day might mark the passing of someone’s conversation, a place you visit, or your doggedly independent struggle with self assembly furniture. Once upon a time, you fell in love for the first time, for the last time. You believed in fairies. You nodded to the woman on the bus who always had a red shopping bag on her knee. It may not have happened yet, but one day it will be the last time you pitch up at work at eight a.m. after walking home from a party at five with your shoes in your hand.

I don’t have the last message either of my parents left on my answer phone, because I didn’t know it would be their last. I do know that I’ve seen both of them for the last time, although that was only evident in advance for my dad. Mum, only superficially aware of who I was but up for a chat anyway at my last visit, was chuckling and waving when I left. My sister and I were on our way to see her on Thursday after a far from explicit indication from the hospital that things were not as straightforward as they had told us earlier. We arrived a few hours too late.

And so our trip was suddenly re-purposed towards a sadly familiar set of functions: solicitor, care home, funeral company, then back to the garden centre for another shrub. We knew what to do this time; if we had another parent, we would have this off pat. So we clinked a toast to our mother as the hotel gave us McGuiness Flint’s ‘When I’m Dead and Gone’ on a muzak loop, and the next day set off to variously baffle, confuse, and plainly perturb a series of people just trying to do their jobs. Our mother was brought up in the Harp of Erin in Bradford, the granddaughter of County Mayo publicans. She danced on the tables and dived under them when the local copper showed up because she was under-age to be in the bar. So we will have an Irish wake at The Limes. There will be a Ceilidh band. We will plant our mother’s ashes under a Mock Orange shrub next to Dad’s Cherry tree in the home’s garden. Then we will leave The Limes and we will know it will be for the last time.

14 thoughts on “The last day you do something”